By slsdotorg Posted in - Uncategorized on March 4th, 2017 0 Comments 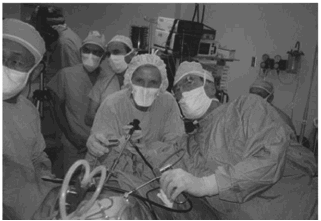 In 1970, Kurt Semm joined the Kiel University Department of Obstetrics and Gynecology as director. He was a Bavarian coming from Munich to Kiel, in Schleswig-Holstein, the northernmost German state. In American cultural geography, this amounts to a southerner from Tennessee entering the high society of Boston. With his distinctive Bavarian accent, he told us within the first few days that the days of open surgery with large incisions will soon be history; we would be changing to laparoscopic surgery with minimal access but better vision. For the readers’ information, this means that when entering the abdomen, we went from a large twenty-centimeter incision to three small incisions measuring half a centimeter each. This surgical technique results in smaller scars, a faster healing period, and much less pain.

Kurt Semm had invented a CO2 insufflation apparatus that electronically controlled the flow of CO2 gas into the abdominal cavity. He used an endoscope to visualize the abdomen and ports, through which he inserted instruments to perform surgery and thus heal disease. The earlier use of air had already been abolished.

These were the early days, in 1970 and 1972, of laparoscopy as a surgical technique (in gynecology, we looked into the abdominal cavity and performed sterilizations and resected small tumors). Much later came endoscopic surgery for general surgeons (e.g., for gallbladder surgery and bowel resections), orthopedic surgeons, cardiac surgeons (for bypass surgery) and for ear, nose, and throat surgeons and others.

Laparoscopic/minimally invasive surgery, with its high success rates, is widely accepted today. New instrumentations are being continually developed and robotic surgery has made great advancements in the field. Laparoscopic surgery has replaced conventional surgery in up to 70 percent of all surgical procedures. However, in the early days, only the surgeon could see through the endoscope and thus a director telling us he can see well when the assistants saw nothing was questionable, or let us just say challenging. Every once
in a while, Kurt Semm allowed us to have a look into the abdominal cavity, but it was difficult to judge the surgery. The technique was subject to much criticism even in our own hospital. The introduction of video laparoscopy, whereby everyone in the room could watch the surgery on the video screen, did not occur until ten years later. Kurt was a pioneer and a great instrument designer; they still call him the father of gynecological endoscopic surgery.

One day our new director asked, “Who wants to join my team to develop this surgical field?” There was silence in our group of thirty doctors; they all thought he was crazy. I raised my hand; I was the only female colleague and I was pregnant (in 1970 I had married and was pregnant with my first son). I said, “It’s a fascinating approach, but I just wish we could have a better look at what you are doing.”

“What am I to do with a woman?” Kurt Semm answered. This was typical of the male prejudice that every female surgeon still encounters in the western world. Interestingly, this is not the case in Asia, where female patients prefer female surgeons. However, I joined him and thus became a contemporary witness of innovative surgical developments, and, with time, a world-famous laparoscopic surgeon in my own right. But it was a rocky road. Why?
Georg Kelling performed the first endoscopic surgery, and viewed the stomach of a dog using Nitze’s cystoscope and an air insufflation apparatus on the occasion of a meeting of natural scientists in Hamburg, Germany in 1901. The technique was not further developed until the 1940s: in France, by Raoul Palmer, and in Germany by Hans Frangenheim. In 1967, Kurt Semm began to initiate developments in this surgical field, and I joined him from 1970 onward. We began to publish articles and hold lectures on laparoscopy around the world; however, the acceptance of Kurt Semm’s technique was arduous and slow.

In 1972 I presented a paper on a series of patients who had been successfully operated on laparoscopically at a gynecological conference in Germany. After my presentation a very famous German professor, Professor Ober, approached me and said, “Young doctor, you have a good chance of making a successful career in gynecology, but please stop performing and talking about this ridiculous surgical procedure you call laparoscopy.”
When I said, “But, Professor Ober, these patients were all successfully operated without cutting open the abdomen and were very satisfied,” he just walked away. It took thirty years for gynecologists in Germany to really accept the technique. Kurt Semm and I were expelled from the German Society for Obstetrics and Gynecology and Dr. Semm had to undergo a brain scan to prove he had no brain damage.

In 1981, after we accomplished the first laparoscopic removal of an appendix in Kiel, the surgeons jumped on the bandwagon and began performing laparoscopic appendectomies. The first laparoscopic gallbladder resection followed in 1987, performed by Philippe Mouret. In 1986, the Kiel School introduced video laparoscopy, as did Camran Nezhat in the USA. From these years onward, laparoscopic surgery could be viewed on the video screen. Work on imaging steadily progressed from camera and light source development to the invention of the rod lens, from one-chip to three-chip cameras, and to high definition television.

By 1990, all medical disciplines were applying this fantastic, minimally invasive surgery that is not only medically effective, but also avoids larger incisions, prevents pain, shortens hospital stays, and reintegrates patients rapidly back into their family and professional life. Healthcare providers request it in different surgical fields, and it is certainly economic and cost-effective. Laparoscopic hysterectomy, bowel surgery, splenectomy, and other surgeries are now accepted endoscopic procedures and even requisitioned by many insurance companies.

During the years 1985–95, under the fabulous guidance of the American visionary, Jordan Phillips, Kurt Semm and I travelled eighty-seven times to the USA to give endoscopic (laparoscopic) training courses. We performed surgeries and held lectures, always staying three days each on the East and West coasts, or in the Midwest, in order to teach this technique to American doctors. Jordan founded the American Association of Gynecologic Laparoscopists, which today is simply referred to as the AAGL, and is associated with the phrase “Advancing Minimally Invasive Gynecology Worldwide.” There are eight thousand members worldwide.

The use of live surgery in the training of medical doctors has developed gradually. Direct transmission from the operation room (OR) enables a surgeon’s skill to be observed by a large audience at another location, often thousands of miles away at a medical conference. These live surgical events have been integrated into medical conferences around the world in all disciplines. The patient is more secure as well, since the complete surgical procedure is documented by video. I have operated at numerous locations on all continents and was always received by my medical colleagues with the highest respect and friendship.

Apparatus and instrument development, in continuous cooperation with the medical technical industry, has led to new features for coagulation, stilling blood loss, laparoscopic suturing, and the introduction of robotics. Instruments went from two to multiple degrees of liberty, from straight to rotating, multifunctional, articulated, and robotic forms. Precision surgery by means of an enlarged visual image and small or even single port entries for an instrument set with multiple degrees of liberty has become a reality.

In the gynecological field, we also developed the visual exploration of the uterine cavity and the womb, called hysteroscopy. The first light guide dates back to Bozzini, over two centuries ago, and in Germany,
Hans Lindemann from Hamburg laid the groundwork for this technique. Hysteroscopy with a saline solution has become one of my favorite surgical techniques.

In Germany and Europe, as well as worldwide, many professional societies for endoscopic surgery have been founded. I have been president and general secretary of many of the societies for gynecologic laparoscopy and have published on laparoscopic and hysteroscopic surgeries in many high-ranking journals. In later years, I became honorary president and honorary member of many medical societies; people seemed to like my professional approach. 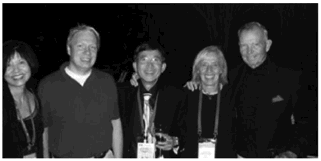 In November 2010, I was the honorary chair of the prestigious AAGL meeting in Las Vegas. This was a huge honor for a German, but of course the world picture has changed. America has opened to the world. We celebrated this occasion in Las Vegas together with my best student and successor in the Kiel School of Gynecological Endoscopy, University of Schleswig-Holstein, Germany, Thoralf Schollmeyer; the president of the AAGL 2010 annual meeting, C. Y. Liu, and his wife and John.

In terms of the international environment in the past, the Vietnam and the Iraq wars, which were fought with great pride and a certain mission by the Americans, have also brought them many enemies. The opening of the USA to the world, on so many levels, has become more evident recently. A black president, Barack Obama, as much as he may be criticized within the country, is a phenomenal change, and his strategies are well accepted around the world. Together with his government, he has reshaped the world’s image of America.

When I started in gynecology in 1968, I was the only female among thirty male colleagues and had to prove myself over and over again in order to get ahead in a German university hospital, but with good academic work you always progress. I was also the first female professor in our specialty in Germany. Of course, I had to let several of my male colleagues pass me by, but it did not hurt me, and in the long run we all became good friends. On the contrary, if you have to fight for something, you enjoy the success even more. Today, 60 percent of the doctors in the Kiel Department of Obstetrics and Gynecology are female.

It may hurt at times, but it seems to me you always win in life if you give way to others.

This website uses cookies to store information on your computer. Some of these cookies are used for visitor analysis, others are essential to making our site function properly and improve the user experience. By using this site, you consent to the placement of these cookies. Click Accept to consent and dismiss this message or Deny to leave this website. Continuing to browse the website without selecting one of these options will automatically cause acceptance of the use of cookies. Read our Privacy Policy for more.AcceptDeny