Use of Neutral Argon Plasma in the Laparoscopic Treatment of Endometriosis

INTRODUCTION
Plasma is often described as the fourth state of matter, consisting of ionized gas in the form of high-energy particles. At low temperatures (variable depending on the material) all matter exists in solid form. As heat is added and temperatures increase, the solid melts into liquid then evaporates into gas. When enough heat is applied to a gas, atoms and molecules are ionized and form plasma (Figure 1). The energy density in the plasma state is much higher than compared to solid, liquid, or gas. When heat is applied to argon gas, one of the noble gases, the electrons and argon ions separate to form pure argon plasma. 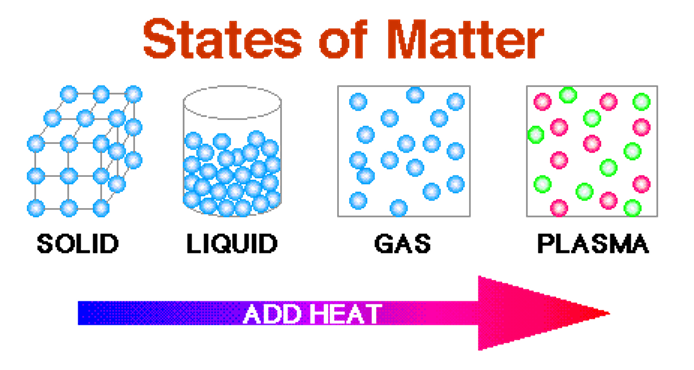 The PlasmaJet system (Theale, Berkshire, UK) provides an electrically neutral stream of ionized argon gas. A low voltage of approximately 30V ionizes the argon gas thereby producing electrically neutral, high energy argon plasma which is emitted from the tip of the handpiece in a precise jet stream. Possessing thermal, kinetic, and light energies, the jet of plasma first blows away debris, tissue, and blood from the point of application. A thin, flexible coagulum is then formed which seals the tissue surface. Animal studies have demonstrated a depth of penetration between 0.5 to 2.0 mm depending on duration of application of the jet to tissue.1 Since its introduction, PlasmaJet system (PJS) hasbeen used safely in both open and endoscopic cases in orthopedics, oncology, gastroenterology, liver surgery, plastic surgery of the abdomen and face, and in thoracic surgery.

The system consists of a handpiece and console (Figure 2). Handpieces exist for either endoscopic or open use and may be either hand or foot activated. The console allows the surgeon to select variable power settings by choosing the temperature and flow of argon plasma, with either continuous or pulsed delivery in either forced or soft mode.

NEUTRAL ARGON PLASMA VS. ARGON BEAM COAGULATION
With both electrosurgery and argon beam coagulation, the current is applied to tissue to cause coagulation through combined effects of heating and arc generation between an active electrode and grounded tissue. Arcing vaporizes tissue and results in small fissures in tissue created by sparks, which allow for deeper tissue destruction as current flows along a tissue’s path of least resistance, often vessels that may go on to bleed. In contrast, PJS emits an electrically neutral plasma jet, with no current flowing through the patient, and tissue penetration remains minimal (Table 1).

The PJS behaves in a similar way to the CO2 laser as it desiccates and effectively vaporizes tissue by forming a series of layers of eschar without sparking, and thus without disruption of the coagulum. This is purported to provide a more effective, homogenous barrier to further bleeding.1 Additionally, the PJS employs approximately 10% of the gas flow used by the argon beam coagulator; typical gas flow is less than 0.4 L/min, as compared to 4-7 L/min with argon beam coagulation) thus theoretically decreasing the risk for air embolism and intra-peritoneal overpressure.

Early use of the PJS in several unpublished pilot studies has demonstrated safe application in both open and endoscopic cases in orthopedics, oncology, gastroenterology, liver surgery, plastic surgery of the abdomen and face, and in thoracic surgery.1-4

USE IN GYNECOLOGIC SURGERY
Endometriosis is defined as the implantation of endometrial-type cells outside of the uterine cavity. The condition is associated with chronic pain, diminished quality of life, sub-fertility, psychological morbidity, and work absenteeism.5,6 It is the third leading cause of gynecologic hospitalizations and mainly affects reproductive-aged women.7 It is found in up to 50% of women with infertility8 and up to 70% of adolescents with pelvic pain recalcitrant to conservative measures.9

As lesions are usually undetectable by exam, pre-operative labs or imaging techniques, actual operative visualization and sampling of lesions is necessary to diagnose the disease. Thus, surgical assessment by either laparoscopy or laparotomy for simultaneous diagnosis and treatment of endometriosis has become the “gold standard.” Surgical treatment may consist of excision, vaporization, and/or coagulation of lesions. Multiple instruments have been used for the surgical management of endometriosis including scissors, bipolar and monopolar electrosurgery, ultrasonic energy, and lasers.

This technology is applicable to the treatment of endometriosis, as lesions are frequently superficial peritoneal implants, which are diagnosed upon visualization. The depth of involvement in underlying tissue may be visualized by characteristic expression of chocolate fluid or fibrosis. The goal of treatment is to completely eliminate these lesions when appropriate.10 The PJS is most conveniently used for vaporization of superficial lesions; however, when applied in closer proximity to tissue, the argon jet also effectively cuts tissue. A new version of the PlasmaJet system extends the functionality to include the cutting of tissue.

Most analogous to endometriosis, PlasmaJet has been applied to ovarian cancer. An investigation of its applicability in cytoreduction for ovarian cancer demonstrated that the device effectively vaporized ovarian and peritoneal cancer cells while maintaining minimal thermal spread. The ex-vivo study of high grade serous omental tumors revealed thermal damage to be approximately 5% of the depth of tissue vaporization. With exposures of 2-4 seconds on standard settings, vaporization depths varied from 0.9 to 6.1 mm (mean 2.7 mm; SD 1.3 mm).6

USE ON ENDOMETRIOSIS
For surgical treatment of endometriosis, patients undergo general anesthesia and are prepped for multi-puncture operative laparoscopy as previously described.11 Characteristic endometriotic lesions throughout the pelvis can be vaporized or resected with the PJS at 100% power using high temperature and high gas flow. For vaporization, the PJS probe is applied to tissue from a distance of 5mm, spraying the tissue surface at an angle of approximately 45 degrees until the tissue surface demonstrates a characteristic silver, shining appearance and there is visual confirmation of complete eradication of the lesions. Tissue surfaces are irrigated continuously with lactated ringers to remove debris from the area. In delicate areas such as the ovarian cortex, fallopian tubes, paraureter, bladder, and bowel serosa, lesions are visually identified, vaporized, and irrigated until the appearance of underlying healthy tissue.

Endometriosis lesions can be resected using the PJS as a cutting instrument. The probe is applied closer to the surface at approximately a 90 degree angle.

A total of 46 lesions were safely vaporized or excised with the PJS in locations including the: anterior cul-de-sac,15ovaries,10 posterior cul-de-sac,7 pelvic sidewalls,7 pararectal spaces,2 fallopian tubes,2 broad ligament,1 uterine serosa,1 and rectal serosa.1

Nineteen lesions were resected using the PJS as a cutting instrument. In all 19 (100%) specimens, endometriosis was identified on pathology. Thermal effects did not interfere with histologic analysis in any of the lesions. At eight of these sites, biopsy of the base of the resected lesions was obtained with 100% confirmation of complete resection with no residual endometriosis at the base.

All procedures were performed in an outpatient setting. All patients were discharged within 23 hours postoperatively. There were no intra-operative or post-operative complications.

DISCUSSION
The vaporization technique employed during treatment of endometriosis is analogous to that which is used when other energy sources are employed. In an “onion peel fashion,” layer by layer treatment of lesions is performed from superficial to deep layers, while alternating vaporization with irrigation until underlying healthy tissue is identified (Figures 3 and 4). Our experience reveals that this method of visual inspection accurately determines adequacy of treatment.

Figure 3. Endometriotic lesions on peritoneal surfaces of uterus and bladder. 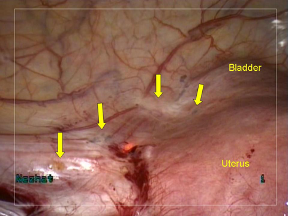 Figure 4. Site of endometriotic lesions uterine and bladder surfaces after vaporization
with PlasmaJet. No visual evidence of endometriosis remains. Note minimal depth of penetration allows for superficial, yet complete treatment. 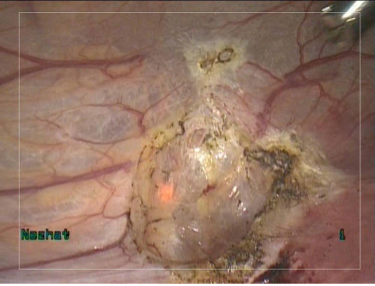 The PJS may also be used as a cutting device for tissue resection by placing the jet in close proximity to tissue. All visually confirmed endometriotic lesions which were biopsied using the PJS were pathologically confirmed as endometriosis.

Histopathological analysis of resected lesions demonstrated <1mm lateral thermal spread, causing minimal specimen damage (Figures 5 and 6). These findings are consistent with earlier studies that demonstrated minimal thermal spread, and thus minimal tissue destruction to biopsy specimens.8,9 Also notable, all areas of resection and vaporization were hemostatic after application of PlasmaJet. These findings confirm earlier human and animal studies, which have demonstrated efficacy in sealing capillary and lymphatic channels in the subcutaneous fat, liver, spleen, and kidney.8,9,10,11 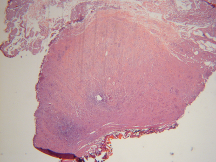 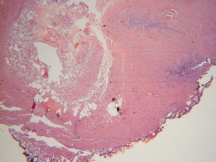 Neutral argon plasma appears to possess unique characteristics that make it a safe and useful tool for the treatment of endometriosis. It can serve as a multi-functional device which has vaporization, coagulation, and a degree of cutting capacities with minimal tissue destruction. The results of our pilot study show that plasma energy appears to be efficacious and safe for the complete vaporization of endometriotic implants and can be used for the laparoscopic management of endometriosis. The system’s ease of use, ergonomic handpiece, and availability through a 5mm port appear to be additional advantages to this system. The absence of electric current flow through the patient also avoids potential complications such as capacitive coupling, arcing, and electric burns. 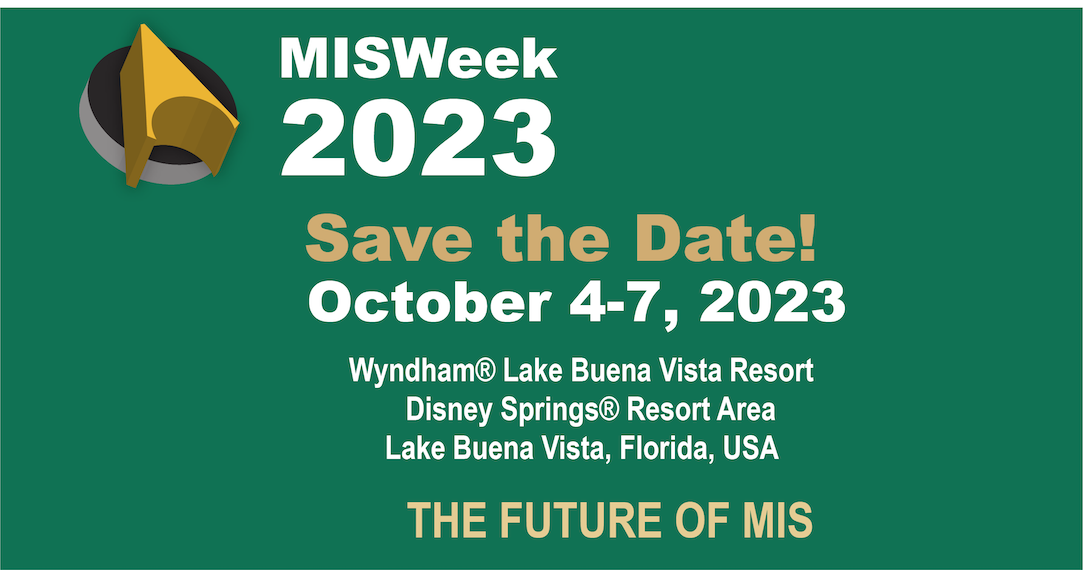